In September, our Muslim allies reached out and asked, “Can you join us to protest the latest iteration of the Muslim Ban?” We said “Of course. Tell us where and when.”

Between September 5 and October 18, American Jews turned out to events, forums, dialogues, and actions across the country — ending with a national mobilization on October 18 in Washington, D.C.

Here are photos, videos, and posts from #NoMuslimBanEver rallies.

Rabbi Mike Rothbaum spoke on behalf of Bend the Arc and our tens of thousands of supporters across the country to say no to any ban on Muslims at any time, in any moment, in any place.

‘I’m here because a Muslim ban, any Muslim ban, is an insult to me as an American and as a Jew.’ pic.twitter.com/cdjqBeKw9L

"I'm tired of talking about him, let us talk about us!.. we say to our Muslim cousins, we have your back." #NoMuslimBanEver - @bend_thearc pic.twitter.com/NT0GfT1ecO

Bend the Arc Jewish Action and HIAS also hosted a Jewish meetup in DC before joining the march and rally.

So inspired by this list of Jewish orgs gathering for the #NoMuslimBanEver march. To our Muslim brothers & sisters, we are with you. pic.twitter.com/tb8Mz5OO4r

A Muslim ban—any Muslim ban—is an affront to us as Americans & as Jews. Here’s the sign we’re marching with today in DC. #NoMuslimBanEver pic.twitter.com/9Tr8j7AUvc

Then we marched to Lafayette Square to meet with other people from across the country.

In DC now #NoMuslimBanEver We will defend each other! @amnestyusa @IndivisibleTeam @MoveOn Join the fight now! Together, we win! pic.twitter.com/lvjSQiqm9g

Check out these great 180° views of the rally:

Muslims and their allies out in full force in DC to say #NoMuslimBanEver pic.twitter.com/OFaQTq0RXa

And the inspiring signs:

In LA, our Rabbi-in-Residence Aryeh Cohen, spoke at the #NoMuslimBanEver rally. 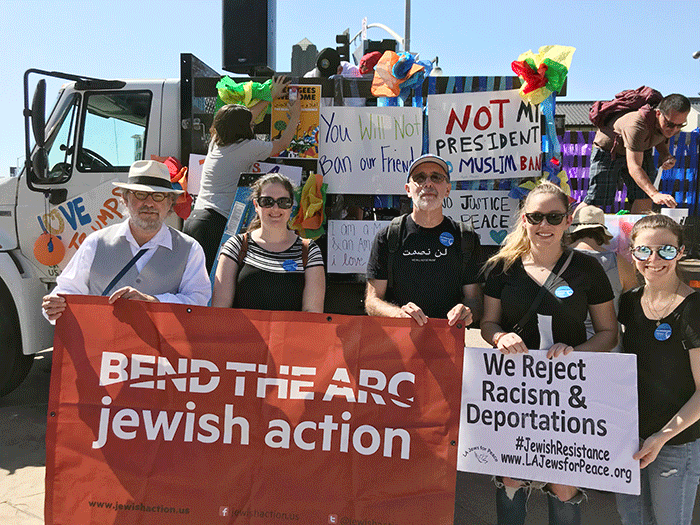 Here's some of what Aryeh said:

We are here to say: this is what America looks like. We are here to tell our racist and xenophobic president and his administration, who work diligently if incompetently to ban immigration from non-European countries, but cannot be bothered to voice a full-throated, unconditional, condemnation of racism or antisemitism: America does not look like you and your cabinet. This is what America looks like. We will not let you change that.

Trump’s Muslim Ban 3.0 has been blocked for now by two federal judges, but American Jews will stay vigilant and stand alongside our Muslim neighbors to love and protect one another.

Onwards. Join the Jewish Resistance with Bend the Arc Jewish Action at www.jewishaction.us/resist.