After terrorism in Charlottesville, Stephen Miller must go

*** UPDATE 8/30/17: Thanks in part to pressure from our movement and allies, Bannon and Gorka are finally gone from the White House. Now we must continue to fight the white nationalism that enabled the events in Charlottesville, which includes removing Stephen Miller, Trump's senior policy adviser who helped craft and promote the Muslim Ban. ***

What happened in Charlottesville was the inevitable result of Trump’s Administration and agenda. By fomenting hatred against — and scapegoating — people of color, Muslims, immigrants, women, the poor, and Jews, Stephen Bannon, Sebastian Gorka, and Stephen Miller empowered the white supremacist alt-right who took over the streets of Charlottesville with torches, guns, and pipes, chanting anti-Jew hatred, beating people of color, and killing Heather Heyer.

These three men, all members of President Trump’s inner circle, have championed the antisemitic, racist, neo-Nazi movement that chanted “Jews will not replace us,” gave the Nazi salute, and stoked the deadly violence in Charlottesville this past weekend.

And the President, in his words and actions, has made clear where he stands.

None of us are safe while these toxic men remain in positions of power, driving a resurgence of white nationalism in America.

While several Members of Congress came out to offer prayers and call out hatred, racism, and domestic terrorism, it is not enough. We call on every Member of Congress to demand the immediate removal of all White House staff who espouse white nationalism in words and policy.

If our Members of Congress don’t take substantive action now, we will hold them accountable for enabling the Trump Administration’s immoral agenda.

With Bannon and Gorka gone, add your voice to a united coalition, all making the same demand for Congress to force the removal of Stephen Miller. Your signature will join thousands of others for delivery by partners, including: 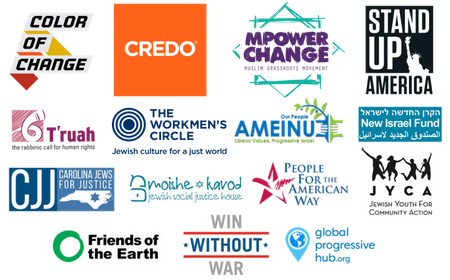